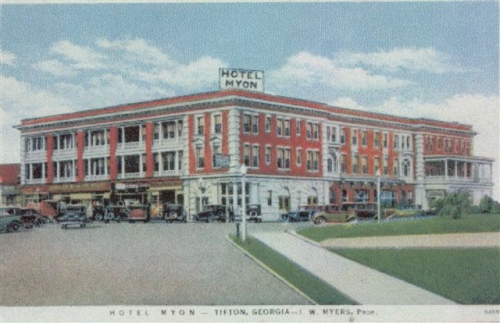 Built by I. W. Myers

The Myon Hotel was constructed in downtown Tifton, in 1906 and was listed as the finest hotel south of Atlanta.

In its heyday, it serviced the commuters from the thirty passenger trains that passed through Tifton at the early part of this century.

The demise of the railroad and changes in the north-south transportation route from U. S. 41 to Interstate I-75 brought an end to the use of the building as a hotel in the 60s. Although the lower level of the building continued to house retail stores, the once elegant and lively structure fell into disrepair and became a monstrous eyesore in downtown. 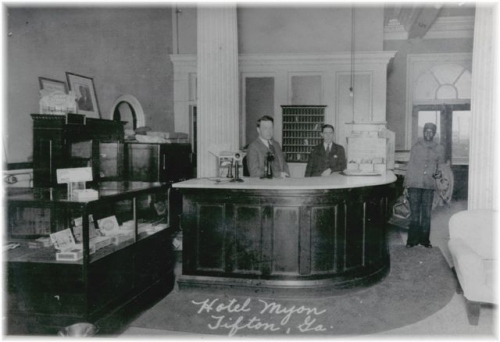 For a number of years the community debated the future of the Myon. The two sides of the discussion centered around demolition or restoration. Meanwhile, by 1984 the City government had outgrown the existing City Hall and was considering building a new facility out of downtown at a projected cost in excess of one million dollars. Simultaneously, Mr. Harold Harper, a local developer had been restoring several old buildings in downtown. It was at this time that the City decided to study the feasibility of a joint venture with Mr. Harper. The original lobby area and adjacent rooms could be developed as City Hall with the remainder of the hotel to be developed into a multi-use complex of professional office space, retail and upscale residential space.

The City decided to hire the architectural firm of Brittain, Thompson and Bray of Macon to study the building and prepare a design and use plan. After the study met with the approval of the City commissioners, they jointly purchased the building with Mr. Harper at a cost of $100,000 for the City and $ 150,000 for Mr. Harper. Next, the City advertised for construction bids based on the specifications prepared by the architectural firm. At the opening of bids in August 1985, the City discovered that bids were running higher than those of the architects estimates for restoration. Bids ranged from $1,089,246 to $1,035,570. Estimates from the firm were between $554,000 – $600,000. The original design plans did not include completion of the third floor or any work on the grounds. 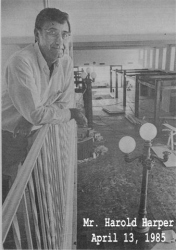 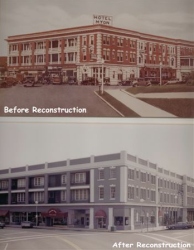 The City then decided to act as its own contractor, hire a project manager, subcontract most of the work and utilize some City labor. The City accepted the low bid for project manager from Mr. Harold Harper at $25,000. Ultimately the project cost the City $865,955. That included completion of the third floor and grounds.

The privately owned section of the Complex qualified as a certified historic preservation tax credit project and was documented through the Georgia Department of Natural Resources-State Historic Preservation Section. Every attempt was made to maintain the original architectural integrity of the building. Various items which were added during construction were designed to blend as closely as possible and complement the design of the structure.

The majority of the reconstruction work was subcontracted after the project manager reviewed quotes from companies qualified to perform the work and after the City Commission approved the quotes. Most of the work was completed by local contractors. The City prepared a cost analysis of the project which indicated the labor costs of the city employees. Prison labor was utilized from time to time.

In 1985 the City Manager established a building fund with monies from the City’s general fund. This money was later used to purchase the building. Restoration was paid for by funds from the City’s Gas Department account.

In the summer of 1987, the City moved its office from the overcrowded 1950s City Hall into the like-new building which had been equipped with modern heating and cooling, lighting, and a state-of-the-art computer system. 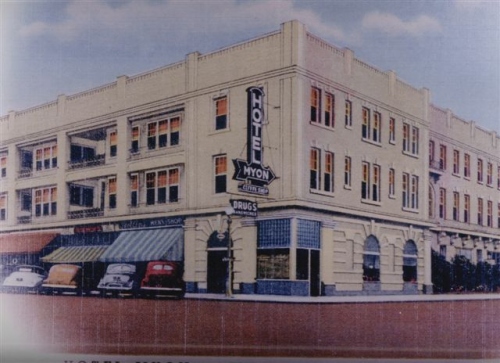 Based on figures kept during the restoration, the City had saved the tax-payers approximately $500,000. This was accomplished by the City acting as its own contractor and by using Mr. Harper as the project manager. At the dedication of the building on September 13, 1987, Governor Harris said: ”You didn’t wait for Atlanta, or wait on anyone. Instead, Tifton showed what could be accomplished if people were willing to work together. Your spirit of renewal, self-reliance, your can-do attitude are the things that make a great state and a great nation.

Tifton is an example for others to follow and your pride will encourage other cities.” Today, following its painstaking construction, The City of Tifton owns about 18,000 square feet of the massive building. The lobby area is a grand and awe-inspiring entrance to the building featuring an atrium that rises three stories to a reconstructed skylight which is fitted with energy efficient glass. Surrounding the atrium is a classical balustrade accented with fluted ionic columns. The lobby floor, originally terrazzo, was reconstructed and the Myon insignia was left intact.

Offices for the City Manager, City Clerk, Bookkeeping, and a public restroom are located on the second floor. Human Resources Director and the Director of Finance as well as additional storage areas, an employee lounge and employee rest rooms are located on the third floor, which is accessible by elevator or staircase.

Although historically the City of Tifton never had an architecturally significant City Hall, the citizens of the community now point with great pride as they take visitors to see this magnificent restoration project. Since its restoration, City Hall has served as a showcase of the new spirit rising in the City of Tifton. The Chamber of Commerce now brings new industrial prospects first to City Hall and then to the industrial park. The building has served as a catalyst for the downtown revitalization program (Main Street), creating a ripple effect in surrounding property in downtown. Buildings are being bought and restored at a phenomenal rate. New businesses are coming into downtown and new jobs are being created. Such success can be directly attributed to the City’s commitment to remain in downtown and to the preservation of such a significant structure in the City of Tifton. 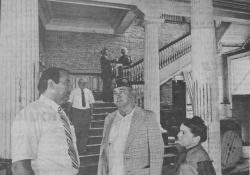 Members of American Legion Post 21 and the Legion Auxiliary recently toured the renovations underway and the former Myon Hotel building, which will be the new Tifton City Hall. The Legion and Auxiliary recently contributed $5,000 towards the purchase of furnishings for the lobby of the building. Shown are: City Manager Webster Morgan (left), Paul Prefontaine (center) Legion Post Commander, and Chris Free President of the Auxiliary. 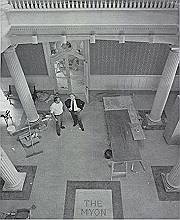 Over looking the renovations of the lobby of the new City Hall.

The Myon Complex Tifton City Hall. An open invitation to all citizens, The Tifton City of Commissioners and Harold G. Harper invites and encourages you to attend the dedication ceremonies and remarks by the Honorable Joe Frank Harris for the Tifton City Hall and Myon Complex Sunday, September 13, 1987 2:30 until 5:30 PM, 130 East 1st Street Tifton, Georgia. This is the open invitation that ran in the Tifton Gazette on September 3, 1987 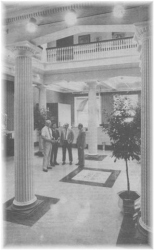 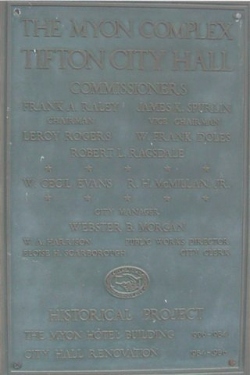 To the right is the plaque that proudly displays for all City Hall patrons.