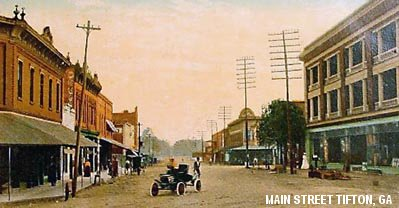 In the mid 1800s, Captain Henry Harding Tift left his home in Mystic, Connecticut for the piney forests of South Georgia to harvest timber for the family shipbuilding business. Little did Captain Tift know that the sawmill he built to prepare the lumber for shipping, and the train tracks that were laid to ship the lumber would be the beginning of Tifton, Georgia.

As Tifts Town (as it was known until 1890 when the name was changed to Tifton) grew, Captain Tift and his associates adopted the same town layout that Mystic, Connecticut had, with even numbered streets running east and west as one traveled north from the center of town, and odd numbered streets following the same suit as one traveled south. Tifton had no town square and the City was crisscrossed with rail lines, all heading from the center of town like spokes on a wagon wheel.

The town boasted the same grand facilities as many small South Georgia towns a courthouse, a town hotel, commercial buildings and other features. Many of these buildings featured interesting interior and exterior architectural embellishments of the times. As the town grew, Tifton built an opera house, several silent movie theatres, churches, and saloons. At the turn of the century, a thriving community had evolved from the pine forests and electrical lighting was the rage. The Myon Hotel, built in 1906 was billed as the grandest hotel south of Atlanta, entertained many a guest in splendid surroundings.

Tifton grew and so did the opportunity for commerce. The once dirt roads were paved. Captain Tift set aside land for a public park. Governmental offices were being created and filled. Tifton now had its own telephone system. Indoor plumbing was the norm and plans were being made to construct a grand movie theatre at the center of town. The Tift Theatre was built, the Myon Hotel business was booming, and nearly all the businesses of the community were located within a twelve block area. Town streets were the setting for parades, tobacco balls, pageants, and community activities. Men and women returned home from World War II and enjoyed the air-conditioned comfort of the Tift Theatre complete with color movies and improved sound. Children could walk safely to the corner drug store for a hotdog and cold coke. The Post Office was a place to meet your neighbor and catch up on the latest gossip, or maybe the barbershop across the street held more interesting company. Progress met the south when President Eisenhower proposed a new road system that would allow travelers to get from place to place in record time. He would call it the interstate system and it began, right here in Tifton, Georgia.

Unfortunately, the interstate was a major contributor of the demise of many downtown’s. As the system was built, new areas of development came along side these roadways. Since WWII, many women had joined the workforce and did not have the time or luxury of staying home with children while father was at work. Quietly, the communities focus on town activities shifted from the town center to the new suburbs. With more income for families, automobiles that were once extravagant luxuries were in every driveway, and they were ready to travel the interstate for destinations beyond home. Tifton was growing and changing. Hotels were being built along the interstate to accommodate the travelers. Service stations and shopping areas were going where the development was occurring, on the interstate.

Like many communities in the 1970s and 1980s, the people of Tifton realized that they had lost a sense of community. Granted, thousands of cars were driving through daily on the interstate, but where was the corner drug store that had served those great hotdogs just a few years ago? One by one, many of the stores that lined Main Street in downtown Tifton were closing or relocating from Main Street. The opening of a new mall at the interstate lured more stores away. The once grand Myon Hotel was now a boarding house that was home to flocks of pigeons and unmentionables. Many grand buildings that once were the pride of downtown were vacant and deteriorating. Some had been passed on to the next generation of owners who did not live in Tifton, adding apathetic, absentee landowners to the problem. This transition did not happen overnight, but the end result was the same, downtown was deteriorating rapidly.

Tifton had basically walked away from its heritage, its core and its future. A once thriving, family filled, historic resource was very close to being gone. Some advocated removing all traces of the Tifton that grew from the pine forests. Fortunately, several community “old timers” who had fond memories of downtown Tifton and still had a spark of hope for its resurgence came to the rescue.

The City itself became the catalyst that would begin the rejuvenation of downtown Tifton. The City of Tifton needed a new home, having expanded to the point of outgrowing City Hall. A bold step was made when City leaders decided to look at the once grand Myon Hotel as a home for administrative offices. The infrastructure was in place to support the move, and private support was generated for the project. The City investigated all funding sources including historic preservation incentives offered by the state and federal government, as well as grant and foundation dollars. The City partnered with a local developer who purchased one half of the building and the project began. Completed in 1986, the Myon is once again one of the finest buildings south of Atlanta. Now serving as the home of the City of Tifton, the building also houses apartments, professional offices and retail space.

Following the Myon restoration, other projects began to happen, including the purchase and renovation of the Golden Building, the Tift Theatre and others. Since 1986, the tax base of downtown Tifton has shown tremendous growth, averaging a 13% increase from year to year. With the redevelopment and rehabilitation of buildings, new and existing businesses are retuning to downtown. The Downtown Development Authority was formed in 1986 to oversee the renovation process. Pledging to make downtown the center of community activity that it once was, the DDA has been instrumental in recruiting residential, commercial, cultural and governmental activities for the downtown area. 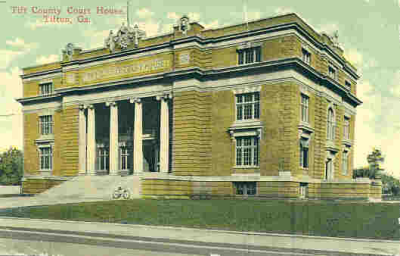 Many of the buildings that had become pigeon aviaries are now shining examples of historic preservation and downtown development. The Tifton Museum of Arts and Heritage, once a church, was built by Captain Tifts entourage of shipbuilders. The church’s interior features are truly unique. The once vacant post office now houses the Tifton-Tift County Public Library. Brumby Crossing, a former cotton and tobacco warehouse, is now home to retail stores and private offices. Another renovation has been the former Williams Brothers Grocery Warehouse. More projects are on the drawing board for ongoing downtown development. People have found loft apartment living desirable and second and third story building space now has a new use. Green space was preserved creating quiet hamlets in which a brown bag lunch could be enjoyed or an evening street dance could be held. The most recent renovation is the old gas station at the corner of Highway 82 and Main Street. Renovated by the City of Tifton, it now houses the City’s Business Development Center and Tifton Welcome Station. A new Criminal Justice Center adjacent to the Business Development Center now stands where dilapidated buildings once were. 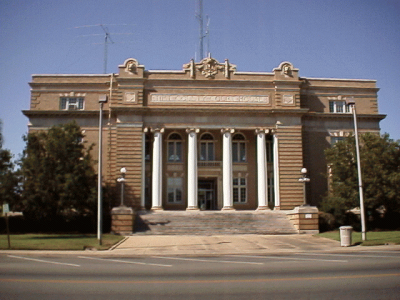 The process of downtown renovation is never complete. Its continuing implementation rests on the shoulders of the community who make a conscientious decision to support the businesses, programs, and projects that downtown presents. Tifton continues to take advantage of opportunities to recreate a haven that brings back that sense of community, a tangible feeling that one is “home", and that a great hotdog is waiting for you at the corner drugstore.

Today Tifton has 15,000 plus residents, serves a seven county area and is expected to be named the next regional hub in South Georgia.